Digital marketer and translator, Elyssa spends her time putting NPD and engineering concepts into plain english and working on new and meaningful ways to connect with Playbook's amazing clients.

So you want to change the world?

Remember when you wanted to be a super hero?

Not like Superman, but someone who changed the world with great ideas that became cool products. A medical device that transforms patient outcomes, a car that gets 100 mpg but is still fun to drive, an airplane that is silent, roads that melt snow and fix themselves…

With a career in new product development, the possibilities were endless!...

So you went to a great school, studied engineering, robotics, electronics, artificial intelligence. And found the perfect job.

Dispersed teams, frequent changes, thousands of things that need to be done to get that idea from concept to a real product...

"Who's working on what? Where is that part? Why are you working on this and not that? What percent complete is that? We need to have more status meetings. We need to focus on everything!"

Then someone came up with a great idea. Let’s write everything on sticky notes and put them on a wall.

That actually helped! Before, the work was invisible... now the team can see it!

At least we know what needs to be done and who is doing it. 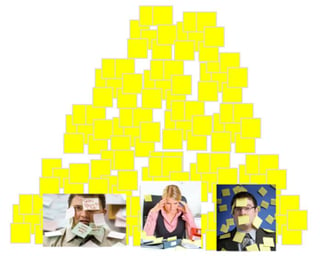 But you know all of the work isn’t equally important.

Things have to be done in a certain order. You don’t have to focus on everything.

What if there was a machine that could analyze the thousands of things that need to be done...sort through the complexity and highlight just the most important tasks for everyone?

Maybe turn the most important tasks pink so the team could see them... and do this every day...for all of the projects?

All of a sudden, the piles of work would look like this: 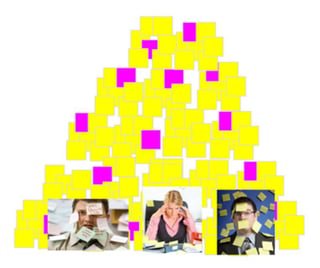 That’s much better! Certainly the team can get those ten things done.

And if we did that every day, the projects will never be delayed because people are working on the wrong things. No one will have to multitask. Everyone will know what's being worked on. And if progress is stopped, the team will know instantly. You won’t even have to have status meetings!

Now that would be an epic invention! 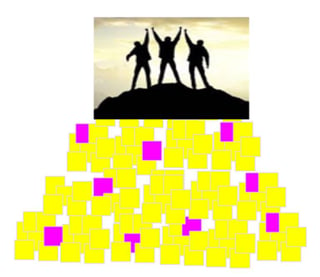 It might not save the world, but it would help a lot of engineers become heroes again so they can…!

Well guess what? That tool exists. It's called Playbook! :-)

Contact us now to request a free trial for you and your team.