Why Use a Buffer Chart?

With Buffer Charts, project status is clear and have a higher confidence in milestone completion dates. Ultimately you can accelerate the delivery of your projects because you have better control.

The benefits of buffer charts

What is a Buffer?

A buffer is an extra amount of time placed at the end of the project in lieu of padding each and every task. It is a powerful technique from Critical Chain Project Management.

What is a Buffer Chart?

Buffer charts are used to plot the movement of a milestone over time giving an early indication if a project is likely to be on-time or late. Buffer charts also help predict actual completion dates and keep management up to date on the status of the project. In this example, the milestone, Prototype Complete, is being tracked and it has a 30-day buffer as shown on the left, vertical axis.

The team's goal is to keep the milestone in the green area, thereby ensuring the project will be completed on-time. When the milestone is in the yellow or red area, it is time to look for and implement countermeasures to get the project back on track.

An Example of a Buffer Chart in Action 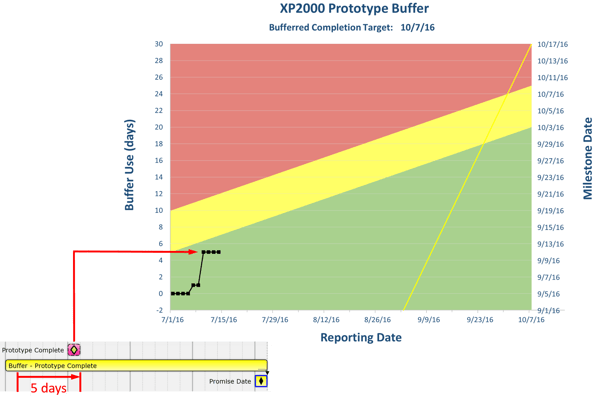 It is also possible that the buffer is used too fast, too early. If the milestone is in the dark red, all of the buffer has been used, and the project is at an Extreme level and will be late if the team doesn't find a way to regain schedule. 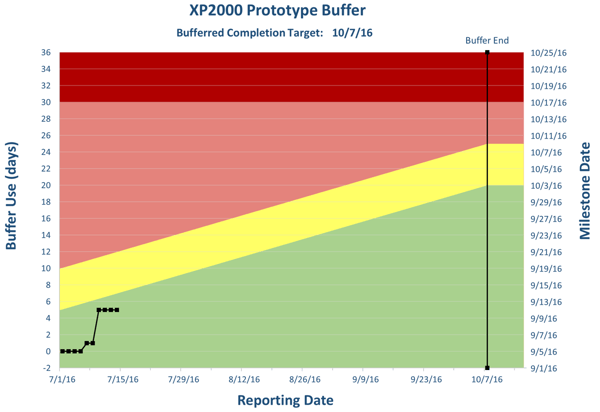 How do I Create a Buffer Chart?

Here is how to create a buffer chart in Playbook.

Once you have successfully logged in, you will see the following message.

If you are unable to log in, you will see the following message. 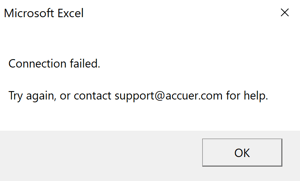 In the Configuration Settings section of the Excel file do the following:

>In cell D5, enter the unique value for Buffer Report(must be the same value used in the Buffer Task's description). 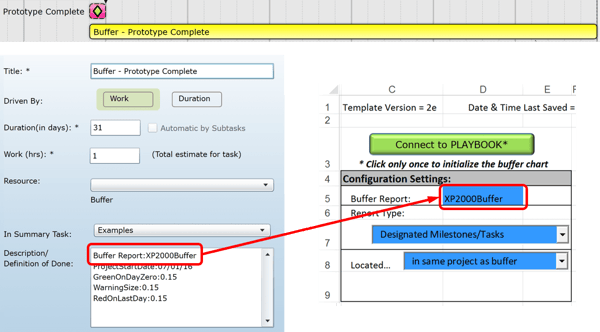 > In cell D7, select Report Type using one of the following options:

> In cell D8, specify where to look for designated milestone/tasks using one of the following options:

> In cell D17, click the green button, Update Buffer Chart - at this point you should see your buffer chart come to life! Contact Playbook Support at support@accuer.com if you're having any trouble.

How do I Configure a Buffer Chart?

The following Chart Settings (cell C11) are used to configure the buffer chart.

Number of Days to Show Above Buffer (weekdays)
This is used when the milestone/task has moved past the end date of the buffer. The days beyond the end of the buffer are shown in dark red. Typically, this is set to zero until/if needed.

Number of Days to Show Below Zero (weekdays)
This is used when the milestone/task has moved earlier than the start date of the buffer indicating the project is gaining buffer. Typically, this is set to zero until/if needed.

Date Format
This controls the format of the dates shown for Reporting Date (x-axis) and Milestone Date (right vertical axis). To change it, right-click in cell D15, then select a different date format. Note: the same date format must be used when setting the buffer task's Project Start Date. See Buffer Tasks and Finish Milestones for details. 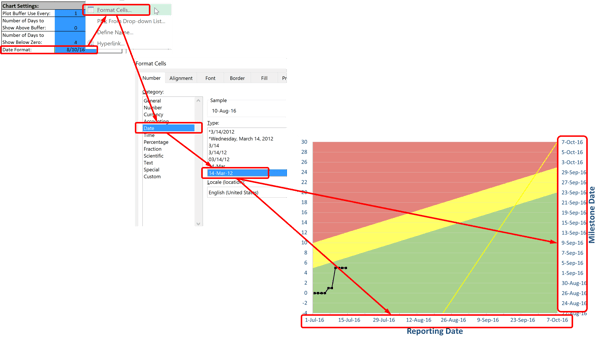 Note: for customers outside the United States, you may need to change Locale (location) to make your date formats work correctly. 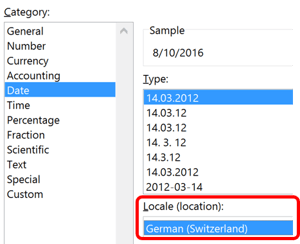 To change the title, double-click in the title field and type in an appropriate title for your buffer chart.


What is a Buffer Task?

A Buffer Task is used to plan for and absorb the variability in the Work and Availability estimates for all work leading up to a milestone (Tracking Milestone). A Buffer Task's lifecycle should be Planned until the upstream work begins at which time it should be changed to Scheduled, typically by the project manager.

What is a Tracking Milestone?


What is a Pace Car?

The Pace Car makes the yellow area (warning zone) in the buffer chart visible in Playbook. 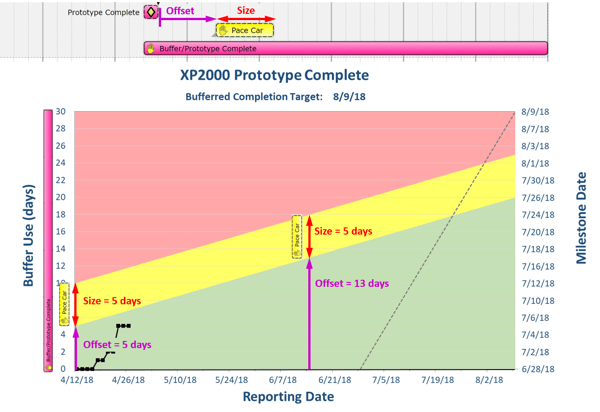 How Do I Configure a Buffer Task?

Create an Individual task and edit its duration. In the Buffer Chart, the Buffer's duration (size/length) and its start date are extracted from the Buffer Task in Playbook.

Add the following two lines in the Buffer Task's description.

mm/dd/yy - The Tracking Start Date is the day the first task which leads to the milestone is started and actively being worked on. It is the day you start plotting the movement of the Tracking Milestone on the Buffer Chart. It must be in the same format as Date Format in the Excel Buffer Chart.


Tip: To save time, copy/paste the Buffer Task, Tracking Milestone and Pace Car together, replacing the Unique Code in all three as part of the paste operation (Replace text looking in both Titles and Descriptions). After pasting, edit the duration of the Buffer Task and Pace Car, and the Tracking Start Date.

How do I set up a Tracking Milestone?

To set up a tracking milestone, add the following line in the Buffer Task's description.

Unique Code - must be the same value used for Buffer Report in the Buffer Task's description. 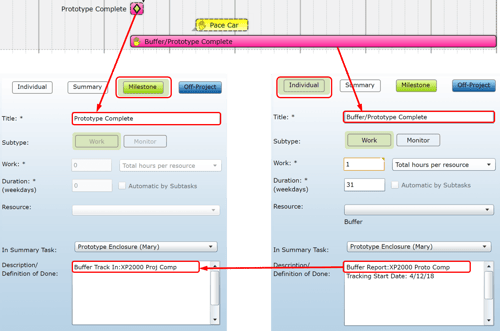 How do I set up a Pace Car?

How do I configure my buffer chart to look the way I want it to look?

Macros and the various settings in the buffer chart Excel file dictate the following aspects:

If you can't get a look you like, please let us know. We can help customize your macro and/or make it easy to configure in the future. Most of the other aspects of the chart are modifiable in other ways.

Changing the Fonts in Your Buffer Chart

Since this is an Excel file, many aspects such as font sizes, colors, and styles can be edited the same way you would format that item in any Excel chart. Right-click on what you want to change and Format Data Labels or Format Axis.

Simply right-click on the area and select Fill and choose the color you like.

In addition to the Buffer Report and Tracking Start Date attributes, you can also specify the following: 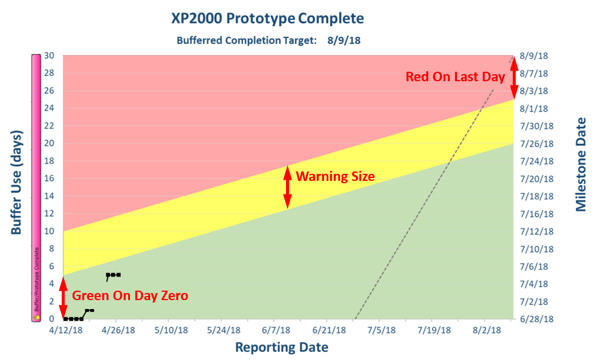 Percentages are used instead of days so they can be easily standardized across projects.